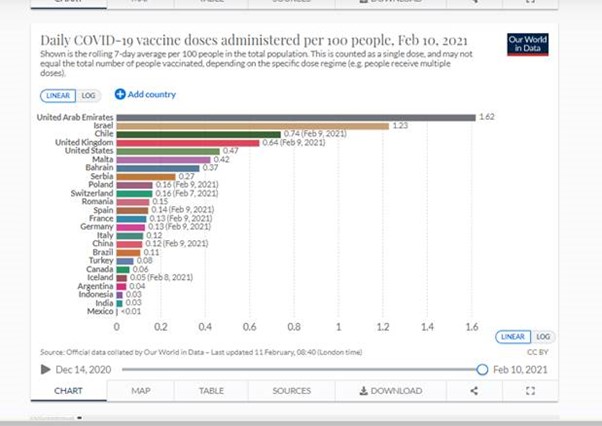 South Africa’s vaccine rollout program was all set to kick off after the Government had received the first consignment of the AstraZeneca’s COVID-19 vaccine on 1 February, with the health care workers prioritized for mid-February. However, results from the South African trial of the vaccine, conducted in about 2000 people, found such 25 % efficacy against mild and moderate disease, that it would not meet minimal international standards for emergency use. Thus, the rollout of the AstraZeneca vaccine was put on hold on 7 February. But scientists are hopeful it might still prevent severe disease and death—arguably the most important job for any COVID-19 vaccine.

Subsequently, the National Department of Health has looked at the other vaccines in its procurement pipeline to kick off the vaccine program. They have opted to use the Johnson & Johnson vaccine first, as part of a research trial. Members of the government’s Ministerial Advisory Committee said the plan was not to discard the AstraZeneca shots. Rather, their use would be suspended until more evidence was available on whether the vaccine protects against severe Covid-19 from the 501Y.V2 variant, which is more contagious and currently accounts for more than 90% of the country’s cases.

Globally vaccination programs have been underway since early December with England being the first country to approve the Pfizer/BioNTech vaccine and commencing its vaccination program in earnest, and then the USA following suit.  The rate of vaccinations administered per 100 people on a rolling day average currently is highest in countries such as United Arab Emirates who have used five vaccines in their program viz Pfizer/BioNTech, Oxford/AstraZeneca, Sinovac, Sinopharm Beijing and Sinopharm Wuhan in their program, and Israel who have used the Oxford/AstraZeneca and Moderna vaccines.

On 4th February an application was submitted to have the Johnson & Johnson vaccine approved for emergency use authorization from the FDA, unlike Pfizer and Moderna, Johnson & Johnson’s Janssen vaccine can be stored for at least three months at 2ºC – 7.7ºC, compatible with standard vaccine distribution channels. It has shown to be 66% effective overall in preventing moderate to severe COVID-19 four weeks after the shot is administered. Johnson & Johnson said the vaccine was 72% effective in the United States, compared to 66% in Latin America and 57% in South Africa. However, the vaccine is 85% effective in preventing severe forms of COVID-19. And the efficacy of the treatment increased over time, the company said, with no cases in vaccinated participants after 49 days.

SADPO will keep our members informed about the roll out plan for the vaccines and want to give our assurance that we are doing our utmost to try and make it as affordable and time-effective as possible.